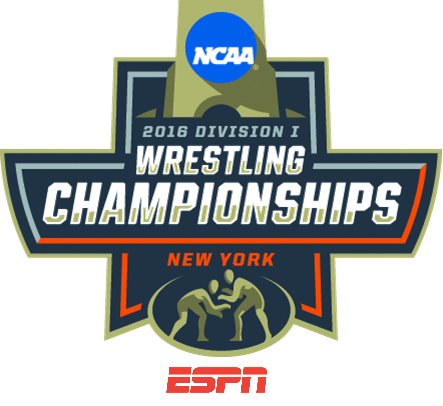 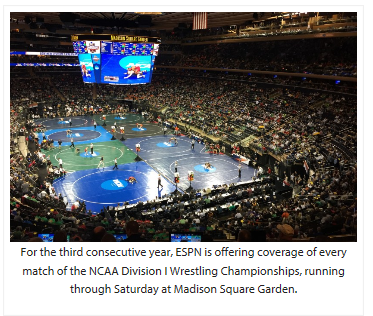 The NCAA Division I Wrestling Championships is one of the most unusual projects that ESPN works on all year. That alone makes what the network is accomplishing this weekend at Madison Square Garden all the more impressive.

“We have no regular season in wrestling, and we come to this event every year for three days and try to be at our best right out of the gate,” says John Vassallo, senior coordinating producer, ESPN. “Working with this crew, we have to get everything ready to be at that high level — production, programming, and operation.”

Beginning Thursday and continuing through the finals on Saturday night, ESPN will televise and stream every session, every mat, and every match of the NCAA Wrestling Championships across ESPN, ESPNU, and ESPN3.

It’s wrestling nirvana for hardcore fans of the college game, but providing a complete set of viewing options is not as elementary as it sounds.

Taming the Mania of Multiscreen

The NCAA Wrestling Championships, especially the first couple of days, are an absolute frenzy. If you think basketball has a lot going on, as many as eight mats (in the first, second, and quarterfinal rounds) run simultaneously, with matches rotating in and out constantly. 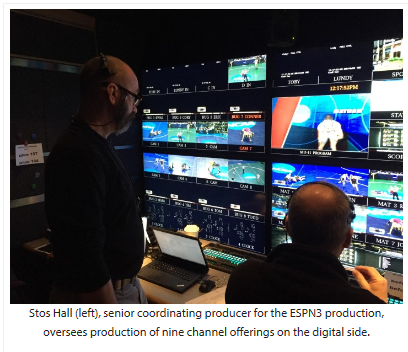 “These matches last, at the most, eight to 10 minutes,” says Stos Hall, senior coordinating producer for the ESPN3 side of the production. “How am I as a fan going to know where my guy is wrestling? I’ve got to find him and get to that feed quickly. My concern coming in was that it was going to be more frustrating for people to offer all of these matches and not be able to get to where they want to go.”

As a result, both the linear and digital crews onsite have placed special attention on creating a truly integrated multiscreen experience through the use of sleek and intelligent graphics. In addition to the obvious scorebug providing live match stats on-screen, a scroll bar (at the top of the screen on linear and at the bottom on all eight ESPN3 channels) offers an updating ticker of matches currently happening on all of the mats and what’s coming up next on each mat. Additionally, ESPN3 is offering a ninth channel feed that is a fullscreen graphic providing a view of all the matches in progress and where viewers can find them.

“It’s great that we can offer every mat all of the time,” says Vassallo, “but, if I’m an Iowa fan following my bracket and I want to see a specific wrestler, how do I know when he’s going to wrestle? This graphic can show you what’s going on now and what’s coming up next on each of the mats. It allows people to use the TV show and the computer together.”

Inside the truck, ESPN3 Technical Director Monty Poling has made more-robust multi-mat coverage possible by splitting the 4 M/Es in the Grass Valley Kayenne switcher to give the crew eight outputs. That was, the production crew can individually control each mat program feed, including custom graphics and logo flies, and switch to a beauty shot of the arena when there’s no wrestling on a given mat.

A central part of making all those graphics and viewing options a positive experience for viewers is a robust and accurate data and statistical network.

Brian Frattini, a production analyst for ESPN, has led the build and deployment of a scoring and data-integration system developed from scratch that plugs into the in-house official scoring system and feeds into the event’s primary on-screen graphics engine, the ESPN Camino by AJT Systems, with an assist from Vizrt and the Duet from ChyronHego. 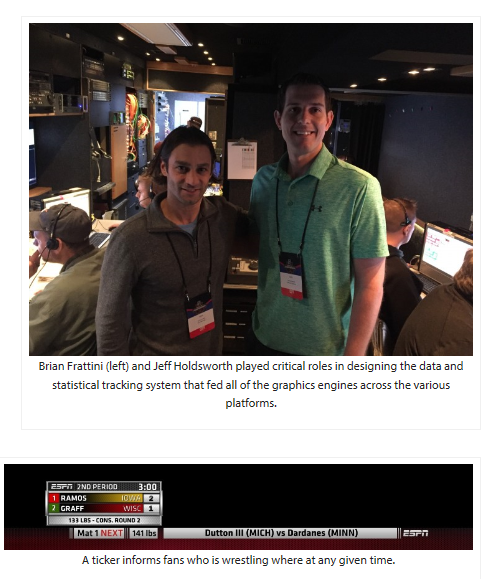 “Normally, at an event like, say, football, you are used to getting a pulse of data from the clock and official statistician,” says Frattini, a former wrestler himself. “Here, it’s more a bunch of XML strings hitting us constantly throughout.”

The system allows a team of loggers to manually input data and update graphics packages on-screen across all the various viewing platforms on linear and digital, as well as social media.

“We rely on [our operators’ experience] for a lot of their skills and their knowledge of the event,” says Frattini. “You can try and keep your eyes on everything, but it eventually comes down to trusting people to get it done. We appreciate what they do for us.”

The engineering and operations side brought two big changes to the compound this year, which is housed inside two of Lyon Video’s newest trucks, Lyon-11 (home to the linear production) and Lyon-14 (home to ESPN3’s multi-mat coverage, replay, audio, and the scoring and graphics team).

First, on the audio end, the crew onsite was able to network both audio consoles — Calrec Apollos — using Calrec’s Hydra2 solution. According to Jarrett Baker, acting technical manager at this event, Hydra eliminated between 10 and 15 DT12s.

“Being able to take the two trucks and tie those two audio consoles together over a piece of fiber instead of the DT12s has been huge,” says Larry Wilson, associate director, ESPN Remote Production Operations. “Being able to get every mic-source prefader to both consoles saved a lot of time and made communications much easier.” 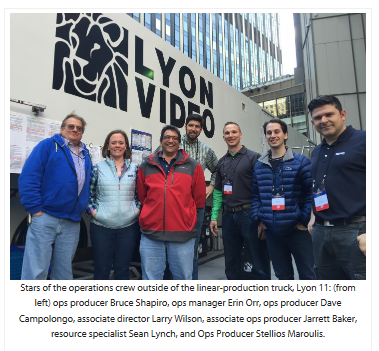 As a whole, this has improved the audio workflow for both Tad Wimer (A1 on the linear production) and Tim Stufflebeam (A1 on the ESPN3 side). In the past, linear had access to all of the various audio sources throughout the building and would pick and choose what was made available in a limited capacity to digital. Now Stufflebeam in Lyon-14 has all of the same mics and elements as Wimer in Lyon-11.

“Now [Tim] can really tailor his mix to how he needs it throughout the show,” says Baker, an associated operations producer for ESPN Remote Production Operations. “And it’s all on a couple pieces of Cat 5 fiber.”

Internal communications also got a nice boost this year with the two mainframes trunked together and linked with MADI. “Now anybody in either truck can listen or talk to anyone that they need to,” says Baker. “In the the past, we just had maybe 10 or 12 four-wire PLs.”

It has also opened up communication with the mat announcers. The NCAA offers radios for purchase by fans at MSG that allow them to switch to the mat of their choice and listen to commentary. ESPN is able to pull those announce feeds and place them on the respective mat coverage on ESPN3. With the improved comms, the truck can speak to the announcers when necessary. For instance, they may want to receive and relay updates on upsets from other mats in the arena. 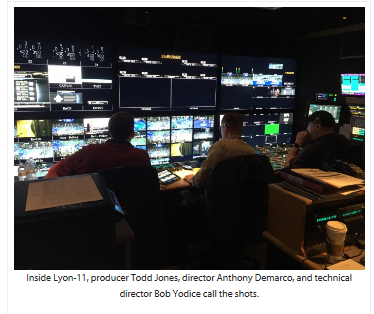 On the transmission end, ESPN has switched to an in-house solution, using an ASI feed from The Switch and a 10-path mux using ESPN encoders. The racks are regularly used on ESPN’s Monday Night Football and were able to be repurposed at this event to avoid renting transmission gear.

A Labor of Wrestling Love

It’s a whole lot of work for a hyper-focused three days of wrestling coverage culminating in the championships Saturday night on ESPN, but, for many on the crew, it’s a unique opportunity to see the sport they love receive the royal treatment.

“You get a lot of people involved who have a connection to the game that love to see it on the big stage like this,” says Vassallo. “You want to be very attuned to what the wrestling fan wants, but, when you are on the main linear network, you want it to be accessible to the casual fan. That’s a challenge, especially when there’s not a lot of it on.”

The ESPNU and ESPN linear production is headed by producer Todd Jones, director Anthony Demarco, and Technical Director Bob Yodice, with help from Vassallo. The ESPN3 side is steered by producer Eric Lilly, director Dave Tasca, and TD Poling, under the guidance of Hall, who doesn’t hold back his love for this one-of-a-kind weekend in the Big Apple.

“This is my favorite event,” he says. “I love hockey, soccer, and a lot of the stuff we do, but this is my baby.”